The Pro II Speed Sensor is a complete and highly-accurate Doppler Radar in a small, rugged waterproof housing that can measure the speed of a wide variety of objects including baseballs, vehicles, tennis balls, and hockey pucks. It combines features and performance of the Stalker Pro II handheld sport gun with the Sport Speed Sensor configuration. The unit is available in an RS-232 model and an RS-485 model and includes complete software support.

The Scoreboard PC application used to configure, control and monitor the Stalker Pro II Speed Sensor. This is the cornerstone of the PRO II Speed Sensor Developer’s kit. 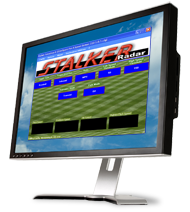