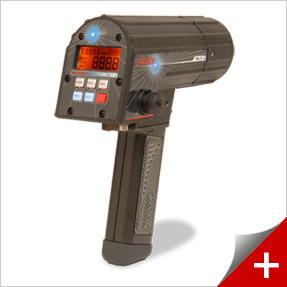 Stalker Pro II is the first sports radar capable of measuring the speed of supersonic objects. The Pro II quickly and accurately measures the speed of anything moving through the air, over land, or on the water. The one sports radar that does it all!

Baseball Mode - 500 FOOT RANGE!
The bi-directional Pro II measures the peak (release) speed and plate (roll-down) speed of a baseball pitch, as well as the speed of a batted ball traveling in the opposite direction. All three speeds display at the same time.

Vehicle Mode:
Clock vehicles on land or water up to two miles away. The Stalker Pro II filters out other vehicles moving in the opposite direction of interest.

Carnival Mode:
The Pro II attaches to the side of a backdrop and measure the speed of midway game balls thrown from only a few feet away.

Tennis Mode:
Track balls on any side of the court, as the Pro IIs wide beam width measures both the balls peak (serve) speed as well as the decelerating live speed.

Not only is the Stalker Pro II the first sports radar capable of simultaneously tracking objects moving both toward and away from the radar, it is capable of measuring speeds in excess of the speed of sound (up to 890 miles per hour or 1,432 KM/H). And the Pro IIs 10-millisecond acquisition time makes it ideal for virtually any type of sport, game, or activity that needs speed measurement.

No other sport radar is as accurate, sensitive, or has as much range and versatility as the Stalker Pro II.